The Standout Goalkeeper Performances Of The Women's EUROs So Far 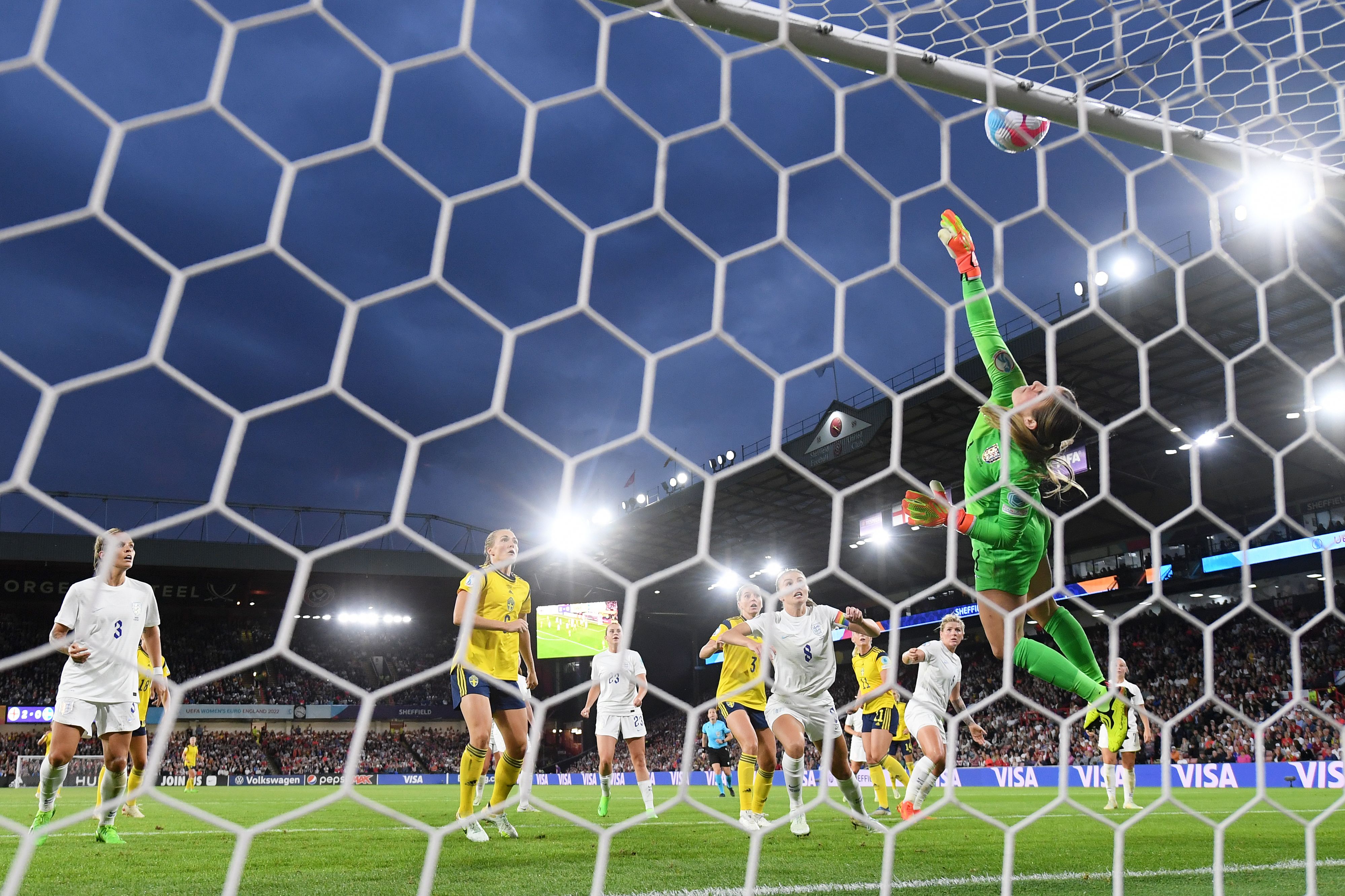 Women's goalkeeping has come a long way in recent years, and EURO 2022 is showcasing the best of that…

Exceeding the levels of popularity seen in their early “golden age”, women’s football has splashed across TV and social media over July with some of the best of Europe’s female goalkeeping talent on display. England’s quarter-final tie with Sweden drew a digital audience of around 14 million people, portraying the extent to which the women’s game has come.

With the thirteenth edition of the tournament nearing its close and the final near, goalkeeping at the tournament has really stood out. Even with Covid picking its way through the teams (England goalkeeper Hannah Hampton one victim of a positive Covid test) this year’s goalkeeping showcase has not waned in its headline-worthiness from a.

However, it’s not just on the pitch that goalkeepers have made the headlines throughout the tournament. As the group games drew to a close, the Telegraph published an article looking at the comparative level of men’s and women’s goalkeeping, branded with the hard-hitting headline that female goalkeepers actually made ‘fewer mistakes than men’. The article also drew upon the relative heights of male and female shot-stoppers, stating that the smallest professional male goalkeeper at the 2018 World Cup (Patrick Pemberton of Costa Rica) was the equivalent height of one of the 2019 World Cup’s female shot-stopping stars, Chile’s Christiane Endler.

Yet, as ex-England goalkeeper Rachel Brown-Finnis opined in an article by The Athletic only a few days previous to The Telegraph’s publication, there is little stopping this generation of women’s goalkeepers; and that’s been proven so far.

“The standard of goalkeeping has gotten much, much better. Look at the Germany goalkeeper, Merle Frohms, who’s come in with a handful of caps. Some of the saves she made against Spain were outstanding — the height of athleticism.”

Indeed, Merle Frohms’ late save against Spain in Germany’s final group stage game was something to behold. Frohms, who plays domestically for VfL Wolfsburg, watched and adjusted her positioning as a ball over the German defence was met deftly by Spain’s Mariona Caldentey. The Spaniard’s quick-thinking strike was met with an athletic spring by Frohms, who propelled herself upwards and tipped the ball over the crossbar, consolidating Germany’s perfect clean sheet record and sending them through to the quarter-finals.

Elsewhere in the group stages, Denmark’s Lene Christensen caught the eye with a fine top handed save. The two Scandinavian teams battled it out for seventy-two minutes before either conceded a goal. In the end, it was Danish striker Pernille Harder who put Denmark into the lead with a perfectly-timed header, not least with a scare from Finland as substitute midfielder Jenny Danielsson shot towards goal in the dying minutes. Pulling out the stops, Danish goalkeeper Christensen made two small steps to her left before pushing towards the top left hand corner of her goal, clipping the ball with her fingertips to push it over the crossbar and save Denmark from a draw.

An unexpected sight at the tournament this year was seeing Dutch back-up goalkeeper Daphne van Domselaar stepping out onto the pitch as number one, due to captain Sari van Veenendaal - who won the last Euro tournament with her team in 2017- falling to a shoulder injury, ruling her out of the tournament at late notice. Domselaar took the role in her stride during her first appearance at a senior major international tournament game, against Portugal. Just after half time, a cross whipped into the box found the head of Fatima Pinto, who flicked a dangerous header towards the goal. Domselaar acted with cat-like reactions, reaching up and tipping the ball over the bar.

And then there was Mary Earps.

As England ran riot over Sweden in the first semi-final on Tuesday night, the scoreline was tailored towards attacking names in lights. Nonetheless, it was England’s number one, Mary Earps, who truly stole the show with a string of impressive saves. Within just 20 seconds, Earps was tested as Sofia Jakobsson was set free down the left flank, bursting into the box and unleashing a shot as Earps narrowed the angle and spread, making a save with her flailing left leg.

Earps was called into action later in the first half, too, as an awkward shot from Stina Blackstenius bounced low to Earps’ left. A strong palm was enough to divert the ball away from danger, but it was with England 2-0 up - statistically one of the most easy-to-lose from positions in football - that Earps thrust herself into the spotlight. A looping chip from Blackstenius, falling towards the top left hand corner, was acrobatically palmed over the bar by Earps, springing athletically to her left and making a picture-perfect top hand save.

Alessia Russo’s cheeky backheel, nutmegging veteran Hedvig Lindahl in the Sweden goal, is not one that Lindahl will want to watch back anytime soon. Still, all kudos to Russo; sometimes, we have to appreciate a match winning goal.

The goalkeepers at this year’s Euro have certainly impressed, delivering winning performances and making show-stopping saves. The Lionesses, set to play one of France or Germany at Wembley Stadium in the final, have dominated the scene this year, making it through the group stages without conceding a single goal. As tension builds towards the grand finale, the pressure mounts on England’s players. The end is approaching, and it will be intense to watch as the women between the sticks fight to head off goals that could make the difference between roaring victory and damp defeat. After all, it’s often the goalkeepers that are the match winners.