Astronomer Goalkeeper Dr. John Harrison looks into how England’s goalkeeping department is expected to fare if the Three Lions have to endure a penalty shoot out at the World Cup…

As has been the case throughout Gareth Southgate’s leadership of the Three Lions, England have yet again made progression through the group stages at a major tournament look like a simple task. Comfortable victories over Wales and Iran and a cagey draw with the USA mean that England will now face Senegal in the Round of 16 on Sunday evening.

Now England are in the knockout rounds, one of the first things on England fans' minds will be “are we going to face another dreaded penalty shootout?”. If we do, “what are our chances of more penalty shootout heartbreak?”.

Under Southgate, England have been involved in three penalty shootouts: a 4-3 victory over Colombia in the 2018 World Cup, a 6-5 victory over Switzerland in the 2019 Nations League, and of course the 3-2 shootout loss to Italy in the Euro 2020 final. Given England’s penalty record before Southgate joined, many have suggested Gareth has relinquished England’s penalty curse and if indeed this is the case, a lot of praise should go to the man between the sticks.

Jordan Pickford has featured in all three of those shootouts and holds an impressive record of four penalty saves out of 15 on target penalties. Saving 26.7% of the penalties he has faced in England shootouts is a strong showing given, on average, on target penalties are only saved 17.5% of the time. This track record suggests that, if England are involved in a shootout during the next few weeks, Pickford could once again be the hero and help England progress late into the tournament.

But three shootouts is a small sample size, and it is technically possible that Pickford is not the best goalkeeping option England have in a shootout. Could it be the case that a Tim Krul-esque goalkeeping substitution will be on the cards if England do finish a game after 120 minutes level?

Below is a graphic which looks at the top flight and full international penalty records, in both regular matches and shootouts, of the three goalkeepers in the England squad and the fourth choice goalkeeper they didn’t bring to Qatar. 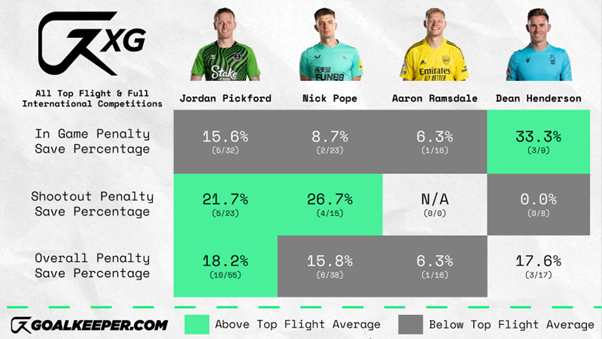 The first thing to notice is that, overall, Pickford has faced the most penalties in his top flight career and has produced the highest penalty save percentage. Looking at the largest and most accurate sample size possible suggests that England should not substitute their first choice goalkeeper off if a penalty shootout looms, as opposed to tactics of the Netherlands in the 2014 World Cup or Chelsea in the UEFA Super Cup and League Cup.

Pickford is the strongest penalty stopper England have and is the only England goalkeeper to have an above average stopping rate. Henderson is in second place overall as he has stopped penalties at an average rate so far, while Pope and Ramsdale are in third and fourth place respectively with both goalkeepers having below-average penalty saving rates.

Interestingly, Pope does have a superior record to Pickford if we look at shootouts alone. However, this is due to some impressive League Cup shootout heroics from Pope which may not translate perfectly to the pressure of a national team World Cup shootout. Additionally, Pope’s poor record in the Premier League suggests that, hypothetically, against the elite takers, Pope is not as strong at stopping penalties. Pickford, on the other hand, has a history of coming up big for England in shootouts.

In conclusion, England are in very safe hands if any of their games go to penalty shootouts. Jordan Pickford boasts an above average penalty stopping record and has produced big penalty saves for England in the past but that does not mean the nerves of England fans won’t be jangling should England face their old nemesis once again this tournament.