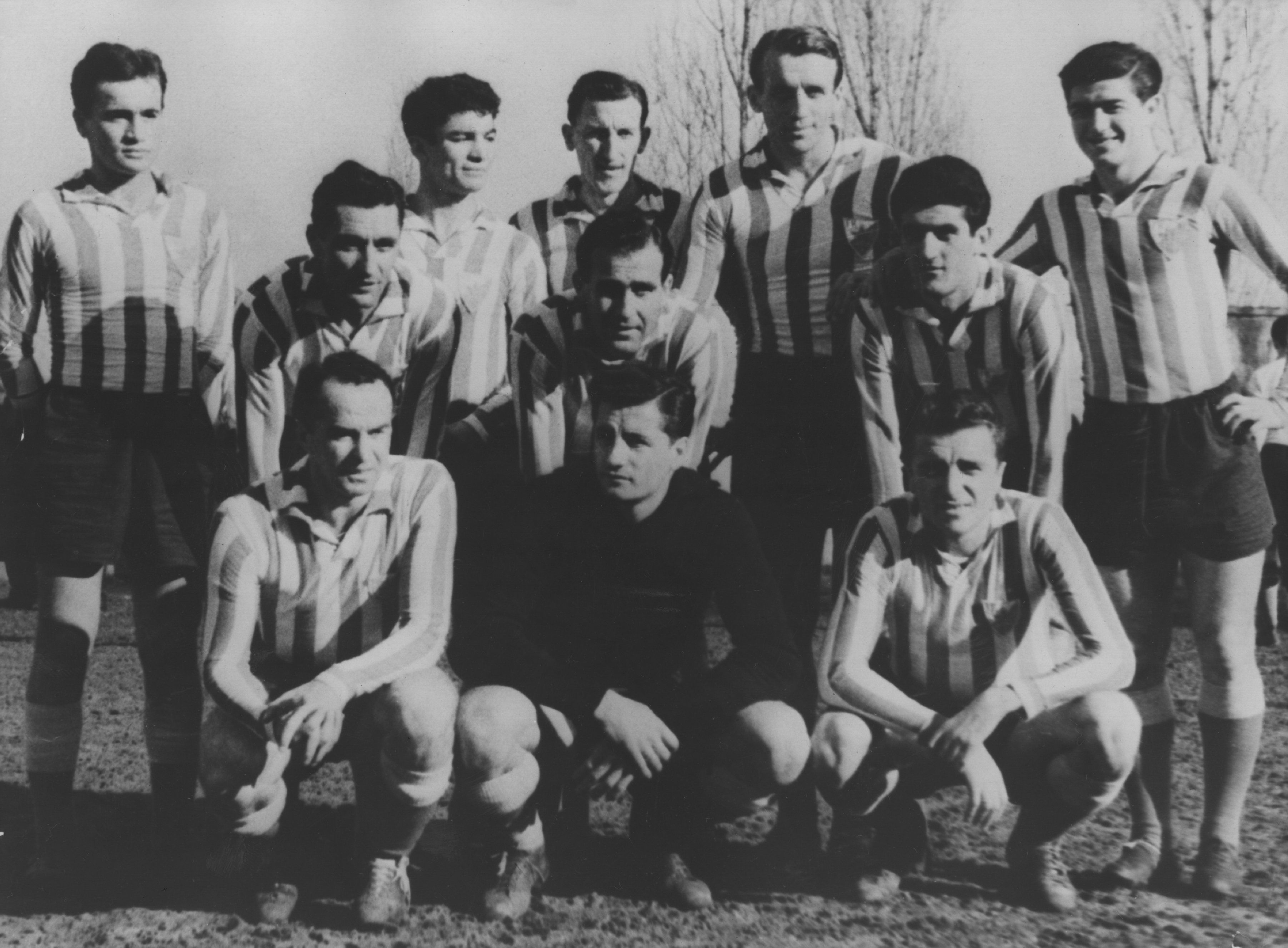 One of Eastern Europe’s greatest ever goalkeepers, Beara was mysterious, imperious…and maybe even better than Lev Yashin…

In the Groblje Lovrinac cemetery in Split, Croatia sits a marble grey memorial plaque. The years of birth and death read 1929 - 2014, making the body in the tomb behind it 85 at the time of death.

The cemetery is vast. Rows upon rows of gravestones line the pathways weaving through its grounds, glimmering pristinely in the Croatian sun. The aforementioned tomb is only one of thousands, but it is undoubtedly a special one.

A photo of an elderly man is placed in the top left corner of the stone. It does not stand out immediately. The man pictured resembles any other elderly European gentleman, but the story he carries is one of mystery, sporting prowess and, in some ways, legend.

The name above the inscription and dates reads ‘Vladimir Beara’. The goalkeeper that some referred to as the ‘Great Vlad’. That others knew of as ‘the ballet dancer with hands of steel’. The legendary shot stopper who Lev Yashin believed was, in fact, greater than himself.

As former Scotland goalkeeper Bob Wilson described, “there was an entertaining, aesthetic air about him [Beara]. That's why his jumps and dives with feet curled and body perfectly poised appealed. He kept goal on his toes, like a coiled spring, always ready to pounce."

And from 1950 to 1959, the Yugoslavian national team had him guarding their goal. Beara was a goalkeeper who was widely considered the best the world had to offer.

It is widely reported that Yashin, upon receiving his Ballon d’Or in 1963, told the world that Beara was the superior goalkeeper. Perhaps this was merely a display of modesty from the Soviet stopper, but whatever the reason, it speaks to the regard in which Beara was held by his peers.

Such high praise does not come without good cause. Beara had a successful career, winning seven Yugoslav First League titles between 1950 and 1960, as well as two Yugoslav Football cups, and an Olympic silver medal in 1952. Yet it was not just his long list of achievements that earned him the praise of his contemporaries; to watch him play was to watch a man completely ahead of his time.

In what limited footage there is available of him today, Beara bares a quintessential resemblance to the modern goalkeeper. He was effortlessly light on his feet, a trait which can be attributed to his early sporting interests. The Yugoslav stopper received training in ballet from an early age, which also helps to explain the incredible heights he could reach when leaping at full stretch.

Couple all this with a grip of the ball in his big, gloveless hands that mimicked the benefits of the stickiest gloves on the market and there stood one of the most intimidating prospects a striker could possibly face. On top of that, he demonstrated inexorable determination to dominate his penalty area, whether balls arrived by cross or by shot.

Beara knew how good he was, too. Perhaps this is why he chose never to set up a wall for opposition free-kicks. He said in interviews that this was so he could have a clearer view of the ball from the moment it left the striker's boot, to the moment it, invariably, ends up in his grasp. One has to assume the level of confidence Beara placed in his own ability would have, alone, had a demoralising effect on the free-kick taker.

And play it he did. In just three years, he would win his first Yugoslav league title and be invited to join the national team at the 1950 World Cup in Brazil. Although he was an unused substitute in all three of Yugoslavia’s World Cup matches, he eventually made his international debut in a 2-2 draw away in England in November of that year.

Making a series of saves that stunned the Highbury crowd, he left a lasting impression on those that saw him play. This performance gave him cult-figure status in England at the time and earned him the nickname ‘the great Vlad’.

Two years later came a second league triumph for Beara’s Hajduk Split and another chance at international glory, this time at the 1952 Olympics in Finland. The Olympic Games were viewed at the time as being as important to win as the World Cup, if not more so.

Beara would start every game for Yugoslavia at the tournament as they battled some of the powerhouses of world football including the Soviet Union, Denmark and Germany, only to eventually fall in a spirited performance against a dominant Hungary side featuring the era’s greatest footballing titans, Ferenc Puskas and Nandor Hidegkuti.

Beara’s performances throughout the tournament drew widespread praise, but his performance in the final, limiting that great Hungarian side to only two goals, cannot be overstated. In the same game Beara also earned the unique distinction of becoming the first goalkeeper to deny the great Puskas from the penalty spot.

By 1953 Beara’s qualities were universally recognised in Europe. His stature in the game translated to a place in a ‘FIFA World-Stars XI’ to play an exhibition match against England, at Wembley, to celebrate the 90th anniversary of the FA. Coming on at half time as a substitute for Austria’s Walter Zemen, his introduction was initially protested.

At the time, substitutions were only permitted if the outgoing player was injured. As Zemen had been seemingly moving freely, the decision to substitute him sparked argument on the touchline, with the World-Stars XI’s managerial team claiming he had a swollen ankle.

If this substitution was purely tactical, then it would have to go down as a fantastic decision. With the scoreline 3-2 in England’s favour when he was introduced, Beara kept the home side at bay for almost the entire half, while his multi-national colleagues went about putting the World-Stars 4-3 ahead, until a dubious penalty was awarded to England in the 90th minute and duly converted by Alf Ramsey, ending the game at 4-4.

A year later came the 1954 World Cup in Switzerland, and by this time Beara’s selection for Yugoslavia was a given. The starting shirt was his. Bringing home the Jules Rimet trophy was never the expectation for Yugoslavia, but they gave a good account of themselves - particularly Beara who impressed throughout the tournament. With a clean sheet and a win against a strong French side in their opening game, Yugoslavia and Beara had got off to a perfect start.

Up next were the mighty Brazil, who were held to a 1-1 draw with another good performance from Beara keeping them in the tournament. Due to quirks in the way in which this particular World Cup operated, the draw sent Yugoslavia through to the knockout stage, where they would face West Germany.

It was at this stage that Yugoslavia bowed out of the tournament after a 2-0 defeat at the hands of the team who would go on to win the competition. Yet, they could go home with their heads held high, after showing once again that they had some serious footballing talent, not least between the sticks.

One final league triumph was to come for Beara at his boyhood club in 1955, before he transferred to Red Star Belgrade for the following season. It was here that Beara’s medal collection began to expand rapidly, winning at least one piece of silverware per year in his five years representing the club  in a run that included four league titles in five years, and a league and cup double in 1959.

Due to the consistent domestic success during this period, Red Star, and thus Beara, were regular fixtures in European club competitions, reaching the semi-finals of the European Cup in the 1956-57 season. However, the most famous European tie Beara’s Red Star took part in came a year later in the quarter finals of the same competition, against Manchester United.

What was one of the highest moments of Vladimir Beara’s career paled into insignificance after the final whistle was blown. The game ended 3-3 - an entertaining affair - but an occasion that was to become all too solemn.

The United squad landed in Munich for refuelling a day after the game - February 6th, 1958. Conditions in Munich were poor, with the airport covered in snowy slush. The ‘Busby Babes’ were embarking on the last leg of their trip back to Manchester, but would never make it back home.

The clock stopped at 3:04PM. Vladimir Beara was the last goalkeeper much of that Manchester United team would ever face.

Beara made his last international appearance at the World Cup Finals in 1958, in Sweden, with another second round exit for Yugoslavia. There were certainly some commendable results along the way, with the run including draws against Paraguay and a strong Scotland side, as well as a 3-2 victory over golden boot winner Just Fontaine’s France. However, just like four years earlier, West Germany would be too much for them with a 12th minute goal from Helmut Rahn knocking their Eastern European neighbours out of the tournament.

Beara continued to play for Red Star until 1960, winning the title in his last season in Belgrade. Despite this, when he decided to move on, top continental offers were not forthcoming, and Beara would eventually wind up moving to West German side Alemannia Aachen, where he toiled in midtable in the Oberliga West for 3 more years. He eventually brought his playing career to an end at German Second Division side Viktoria Köln in 1964.

With his playing days behind him, Beara transitioned into coaching, becoming Freiberger FC manager in the same year as his retirement as a professional player. He completed a coaching course at German Sport University Cologne in 1967, and would continue his managerial career in nomadic fashion. Beara took in spells in Germany, the Netherlands and Austria between sporadic returns to Yugoslavia and even had a stint in charge of the Cameroon national team.

Beara’s coaching career gave him two more tastes of silverware, the first of which came in 1971 on his return to his beloved Hajduk Split as the club's assistant coach, winning the Yugoslav national championship. This further cemented his hero status amongst Hajduk fans as the club had failed to lift the trophy since his 1955 exit. He went on to guide Tonnerre Yaoundé to victory in the 1975 African Cup Winners Cup; Beara’s only trophy as a manager in his own right.

‘The Great Vlad’, as he was so affectionately known, retired from management in 1987.

After which point Beara lived his life mostly in private, only occasionally granting interviews. When he passed away in 2014, aged 85, he left the world having made an indelible impact on football, on the way goalkeepers played, and on all those who had the privilege of watching the way he played the game.

Vladimir Beara just might have been the greatest goalkeeper you may never have heard of.