The Month In Goalkeeping: October 2022

A look back through the big goalkeeping moments of October…

On the eve of Halloween and with autumn well and truly setting in, the goalmouths become muddier, the ninety minutes feel longer, and the sodden gloves get a little heavier. To all those who may envy the fact that goalkeepers get to wear big thick gloves when the wind bites that little bit more: no, they don't keep your hands warm. In fact, you feel like you're wearing latex icebergs on your hands.

Drawing through the press archives from October, goalkeepers once again made the headlines for an eclectic mix of the weird, the wacky, and the wonderful. From a Ballon d'Or snub for Thibaut Courtois to the effective end of David De Gea's time as a member of the Spanish national team, the biggest names weren't escaping the scathing spotlight of the world's press.

The Daily Mail hit the ground running with a typically Daily Mail-esque headline on the opening day of the month.

Hugo Lloris had supposedly been left red-faced after fumbling Buyako Saka's effort from the corner of the penalty box in the second half - a stinging shot from which Lloris had been caught between save choice - with Gabriel Jesus bundling home from short range to put the Gunners 2-1 up.

Alas, the expert opinion panel that the Mail drew on for their analysis was a few Schmeichels short of professional validity. The ‘overrated keeper' headline was drawn from - you guessed it - football Twitter. As they say, when you hit rock bottom, the only way is up. Could any of the goalkeeper coverage in the media beat the Mail's early entry for worst headline of October? We'll see.

The analysis they drew on was a marginal improvement on football Twitter. BT Sport panellist Chris Sutton was quoted saying that Hart's distribution error was "horrible…wasn't it? It really was. You can't make mistakes like that'.

As the month drew on, we saw Paddy Kenny declaring that he couldn't see Spurs splashing a reported £107 million on Atletico Madrid's Jan Oblak, whilst Charlie Adam opined that Illan Meslier could be open to a move to the North London club. A feel good story popped up on the ninth, when The Cumberland News ran a jovial piece on Carlisle's Tomas Holy going full Pepe Reina and sprinting the length of the pitch to celebrate a winning goal in the side's 3-1 win against Hartlepool.

👀 And here's what Omari's second and our third goal looked like from our pitchside camera yesterday 👇 pic.twitter.com/MuTXizGV3G

Aaron Ramsdale would go on to play down his chances of playing at the World Cup as October moved towards its halfway stage, and Jerzy Dudek's autobiography made some intriguing claims about the nature of Guardiola's great Barcelona side. The Polish goalkeeper suggested that Messi and co. were ‘provocative’, often aiming to annoy opponents they played against. Back on the pitch, Simon Mignolet stole the show for Club Brugge against Atletico Madrid in the Champions League, and Kepa Arrizabalaga reclaimed the starting spot at Chelsea under new manager Graham Potter.

Kepa and Edouard Mendy's battle for the number one shirt has been an intriguing portrayal of the ups and downs a life in goalkeeping can bring. The Spaniard - out in the cold for much of his time in the capital - seemed to be down and out when Mendy's level of performance headed upwards over the course of the 2021-22 season.

Yet, the last month has shown that a goalkeeper's career is rarely a linear line of progression. A series of vilified errors from Mendy saw Potter opt for a reset in between the sticks, and Kepa has well and truly made the number one spot his own in recent weeks. An eye-catching performance against Aston Villa on the 16th was a testament to the refreshed, composed goalkeeper that Kepa seems to have matured into over his time out of the starting eleven.

However, Goalkeeper.com's very own data boffin Dr John Harrison did find that Graham Potter would have the stats fully behind him if he were to opt for a move for Brighton's Robert Sanchez in January. Dr Harrison commented that, based on Goalkeeper-xG models, ‘I imagine when Chelsea do go into the transfer market for a goalkeeper Sanchez will be one of the first goalkeepers they contact. Not only is his distribution top quality, but his consistently solid shot stopping and shot preventing performances for Brighton make him far less of a risk then reinstalling Kepa who at least recently hasn’t even been a superior distributor to Mendy’.

Whilst the goalkeeping situation was looking up at Stamford Bridge, things were going from bad to worse in the midlands. Wolves' Jose Sa revealed that he'd been playing through a broken wrist for much of the season in mid-October. Ex-Wolves man Romain Saiss went on record to describe the damage that letting leaders such as now-Birmingham number one, John Ruddy, go, saying “Trust me, he (John Ruddy) was one of the most important players in the team”, he added. “Because he knows his job. He was pushing Rui Patricio and Jose Sa. They knew he was ready to play because he’s a top goalkeeper. But he was really important in the dressing room. He was one of the captains. Even if he wasn’t playing. He had the same importance as Conor or Ruben".

On Merseyside, Alisson drew within one goal contribution of becoming the shot-stopper with the most goal contributions in the Premier League era. The sublime sidewinder that set up Mohammed Salah's winner against Manchester City at Anfield saw the Brazilian draw tantalisingly close to Paul Robinson's record, and clear of a certain Cristiano Ronaldo's goal contribution record this season, at the time of the fixture. 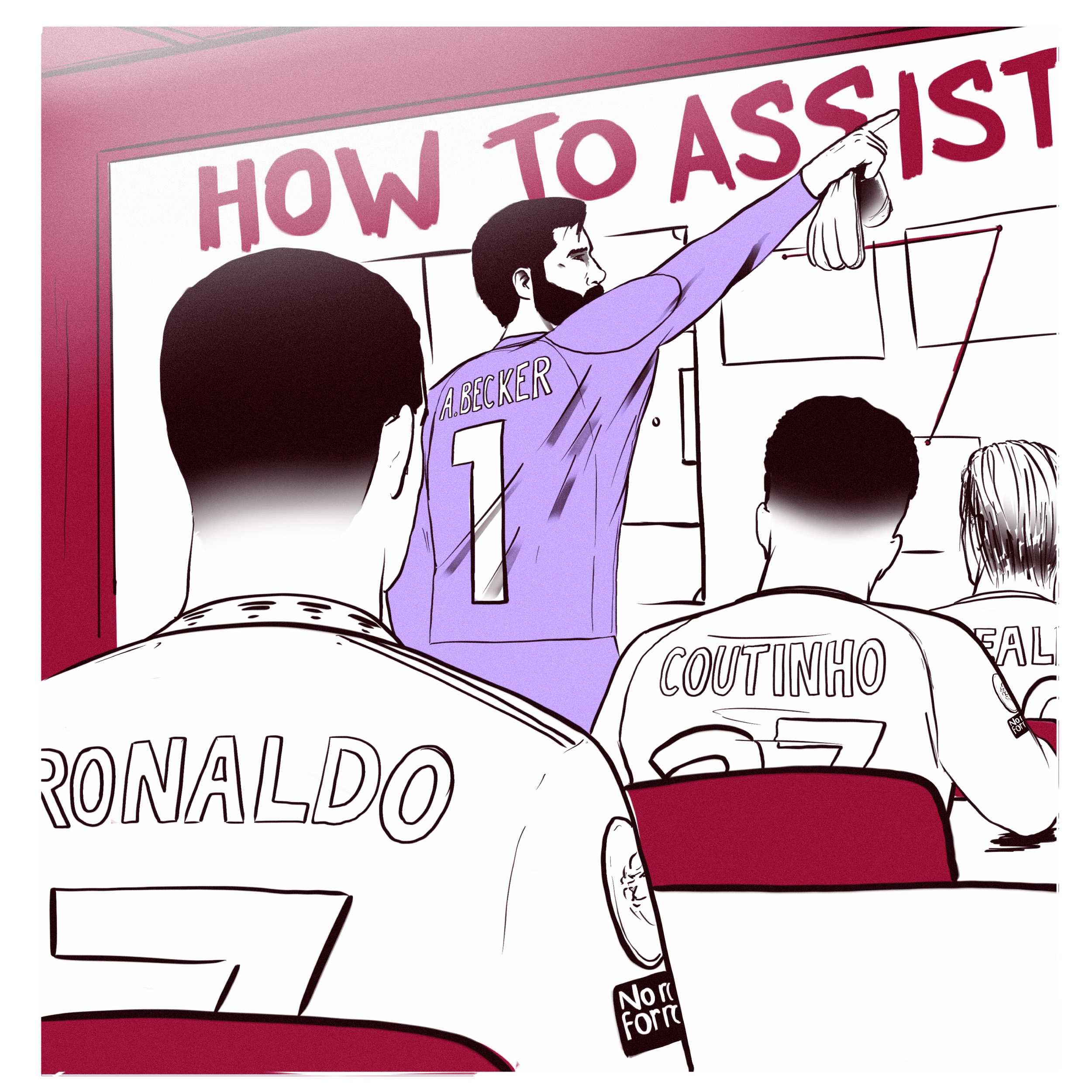 Back on the continent, the Andre Onana vs Samir Handanovic debate prevailed in Milan. Valencia's Giorgio Mamardashvili furthered his case for a big money move in the coming months with a string of strong performances in La Liga. In Germany, however, bad news was breaking. Monchengladbach's Yann Sommer had picked up an injury, and it now looks possible he'll miss the World Cup. In France, Kasper Schmeichel's new horizon still isn't quite going to plan. The Danish goalkeeper was reportedly booed when the team sheets were read out before a fixture vs Nantes, with a move away from Nice in January potentially on the cards.

In the North East of England, Newcastle United revitalised their goalkeeping department following the departure of veteran shot-stopping guru Simon Smith. Adam Bartlett was given overall power of the Magpies' goalkeeping kingdom, assisted by Shwan Jalal who takes over as First Team Goalkeeping Coach after leaving League Two side Stockport County.

As October came to a close, the headlines didn't make pleasant reading for David De Gea and Thibaut Courtois. De Gea was omitted from Spain's 55-man shortlist for the World Cup, with David Raya, Unai Simon, and Robert Sanchez making the list ahead of the 31-year-old. De Gea did his talking on the pitch, producing a fine display against West Ham the Sunday night that followed the squad announcement. A week earlier, Courtois had been a little more vocal about his seventh place finish in the Ballon d'Or standings, bemoaning that ‘without a good goalkeeper, you don’t win a trophy'.

We're with you there, Thibaut.

So, could anything beat the Daily Mail's Lloris-shaped entry for the strangest goalkeeping headline of the month? Step forward - yep, you guessed it - the Daily Mail themselves, reporting that Jens Lehmann faces fresh claims that he's been vandalising neighbours' property.

With the month on the turn and November up next, the World Cup will be upon us within a matter of weeks. We'll be back half way through the most controversial edition of the tournament to date at the end of next month to round up the month in goalkeeping. Until then, Happy Halloween. If you've seen a laugh-out-loud ‘horror show’ goalkeeper pun recently, then send them our way. We'll deal with it in the appropriate manner - an illustration of such hilarity in The Goalkeeper's Chronicle.