The 1998 FIFA showpiece featured the World Cup’s first ever golden goal to elicit agony and ecstasy for the tournament’s two best goalkeepers.

The 1990s was a traumatic, transitional time for goalkeepers.  The backpass rule, where the ball could be picked up and bounced interminably like a pre-serve Novak Djokovic routine, was finally revoked in 1992.  No longer could they live in their own timeline. Goalkeepers were now integrated, active players rather than goods handlers.

When Gazza’s tears gripped the nation after the near miss of Italia ‘90, global eyes were opened to some of the most talented and talismanic custodians of the beautiful game. There was the starfish stretch of Peter Schmeichel;  the fiery Walter Zenga, who always had the presence of a Bond villain at a casino table; and the impossibly small but eye-catching Jorge Campos,  purveyor of the multi-coloured, oversized garments of that decade.

The World Cup in 1998 was showtime for the guardians of the galaxy. History tells us that there will be at least one dramatic hero-defining moment between the posts. The knockout phase would provide more than enough column inches as England’s shootout misery continued.

Before he became more concerned with saving the world, Argentina’s Carlos Roa sent Glenn Hoddle’s team home with a save from Yorkshire’s least effective penalty-taker, David Batty. David Seaman moved quicker than Peter Shilton but it wasn’t quite enough. 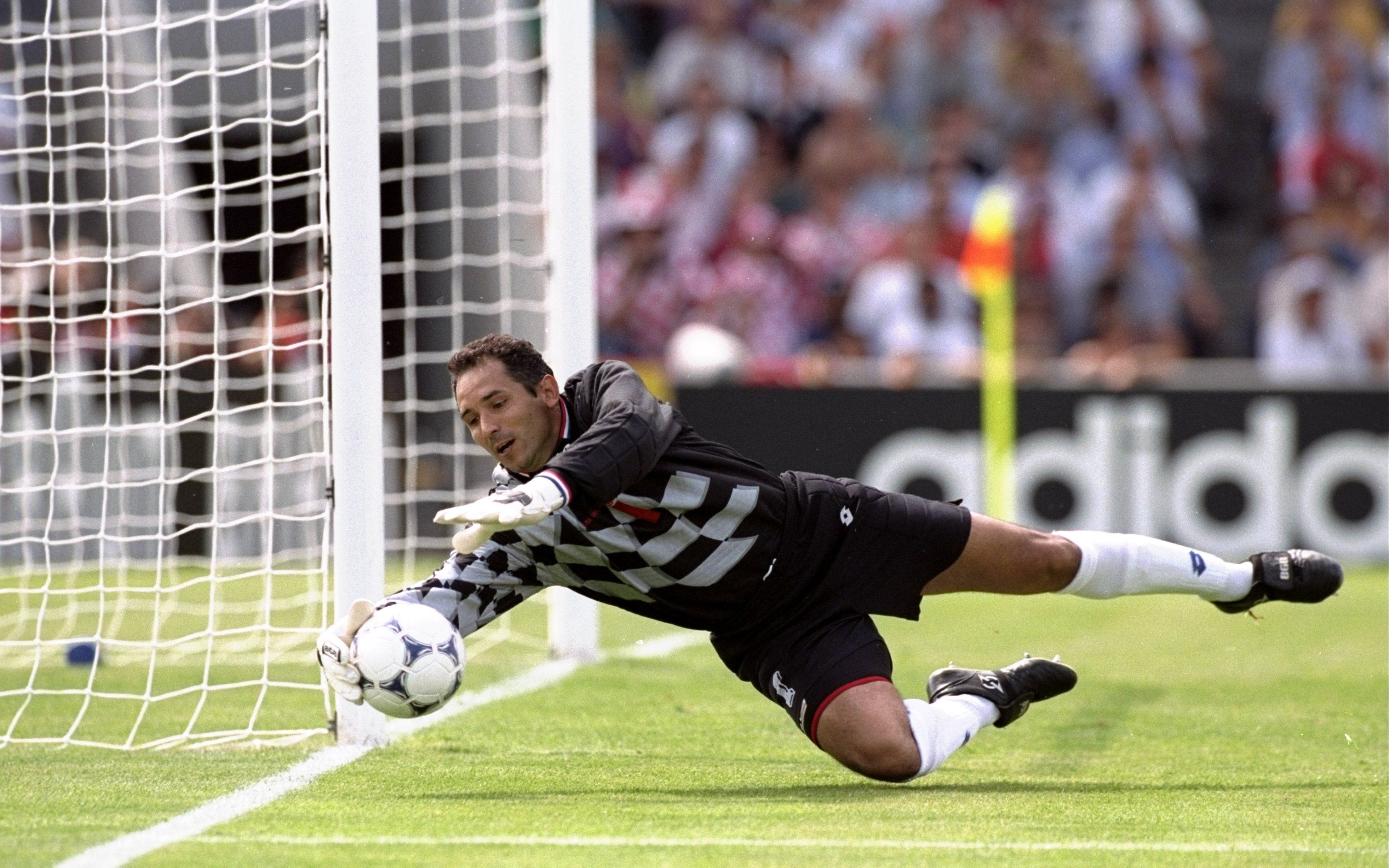 Drazen Ladic may have a war general-sounding name, but he wore the gloves as one of the unheralded heroes of Croatia’s glorious third place. It was a remarkable story for a country that was merely seven years old although they had signalled their rise by reaching the last eight of the 1996 Euros. With Croatia playing at the tournament amidst the background of war, Slaven Bilic said 'we were not just playing for ourselves or even Croatia. We were playing for the people who died".

In their 3-0 win over Germany in the quarter-finals, the Dinamo Zagreb number one made a couple of big stops from Oliver Bierhoff.  Silky Davor Suker’s six goals landed the golden ball and all the plaudits. It was ever thus. As Bilic remembers: “ We finished third in the world because [Suker] scored six goals. At the same time, we had a goalkeeper, Drazen Ladic, who, in three of the seven games, made match-changing saves.”

Nigeria were the only African team to make it to the last 16 having started the tournament with a memorable 3-2 victory over fancied Spain in Nantes. However, red flags and alarm bells were waving and ringing furiously for both sides in nets.

More noteworthy for the Spanish press was the slug-like performance of Valencia veteran Andoni Zubizarreta who looked like a senior citizen in steep stair-falling decline. Shaky all game, he pushed a cross into his own net and generally remained in stasis, rooted to the spot. The Spaniards perished in the group stage and ‘Zubi’ was left to ponder about the wisdom of flagging up his retirement plans beforehand.

Things also began to unravel for stopper Peter Rufai, the Super Eagles' emergency service, who was on the dancefloor in Madrid when he was called up. “I wasn't ready for France 98, either physically or mentally. I was on my holidays and I certainly wasn't thinking about the World Cup. You don't start preparing for a…tournament just two weeks before it is due to begin", he famously quoted.

This became all too apparent during the 4-1 thrashing against Denmark in the last 16.  The players were allegedly tired after sleeping with, ahem, some fans on the eve of the game. Ex-Derby defender Taribo West suggested some of them were busy visiting nightclubs and driving limousines. Judging by the reaction times of goalkeeper and defence, the lights had gone out on their tournament the evening before.

The game that gripped the imagination was the host’s first knockout clash with Paraguay in Lens on a bright Sunday afternoon. It brought together the two goalkeepers of the tournament. Fittingly, they were the most charismatic for the narrative. There was the diminutive Fabien Barthez, nicknamed Le Divin Chauve ('The Divine Bald One'), a man who pulled up his shorts higher than Simon Cowell wore his trousers.

The eccentric Monaco number one insisted on a kiss on his pate from teammate Laurent Blanc before every game in the tournament. It worked. He conceded only two goals on the way to the Golden Glove.

He and Fabien Barthez had the pre-match kiss ritual. It seemed to work as they helped France lift the World Cup in 1998 💋 🇫🇷 pic.twitter.com/Jsl4rNj8zu

The other protagonist was Jose Luis Chilavert, a goalscoring, free-kick-taking maverick with a personality to match. The 74-cap goalkeeper scored eight international goals in his career and threatened another with a set-piece against Bulgaria. Now a presidential candidate in his country for 2023, he once claimed: “I am not the same as Rene (‘the Madman’) Higuita or Jorge Campos – they can’t shoot like I do and I don’t take as many risks as they do.”

This much is true. ‘The Bulldog’ once dispatched a penalty for Real Zaragoza but was so taken by the celebration that Real Sociedad scored in the interim.

Chilavert placed his good-luck charm -- a medallion of the Madonna of Lourdes -- on the grass inside his goal for the clash with the hosts. His defence formed a fortress to halt the traffic of Thierry Henry, David Trezeguet and Youri Djorkaeff. ‘An impenetrable wall’ is how French Coach Aime Jacquet described the South Americans. Curiously, Barthez was having one of his less convincing outings as he let the ball spin away twice from his grasp.

The tension ratcheted up a notch into extra time, especially as this was the first World Cup with the dreaded golden goal. Then, in the 114th minute, Robert Pires delivered a cross, Trezeguet headed it down and from somewhere, Blanc delivered like a centre-forward in the six-yard box to crash in the winner. It was heartbreak for Los Guaraníes.  The team collapsed on the pitch in despair. Their spiritual leader picked them up man by man.

“We lost today,” Chilavert said, “but our team was united. We are heroes, in spite of this defeat, and will be welcomed as such when we return home.” Such backs to the wall memories make World Cups special. It’s not all goals, goals, goals.