They say that form and league rankings go out of the window when it comes to a derby, and they don’t get much bigger than the Manchester Derby. The iconic fixture has seen many scintillating moments - last-gasp winners, fiery tackles and managerial spats - over the decades, truly encompassing the idea that, with passion and the ability to raise one’s game on such a monumental occasion, players are able to defy the logic of form and expectation.

Ahead of the highly anticipated Manchester derby this weekend, here are three of the best goalkeeper performances in this historic encounter.

Manchester United faced Manchester City over two legs in the Carabao Cup final in the middle of the 2020/2021 season. The Red Devils were subjected to a one-sided 3-1 defeat in the first leg of the fixture at Old Trafford, and had a lot to play for in the return leg at the Etihad. Nemanja Matic’s first half-strike even gave the game the excitement it needed and piled pressure on Pep Guardiola’s team, as both teams found themselves neck and neck once again. But the Serbian was given his marching orders a while after, resulting in a 10-man United side being forced to defend more than attack.

It was David de Gea who was in supreme form throughout the game. The Spaniard seemed hungry for a clean sheet from the kick-off. He made four excellent saves within the first 15 minutes of the game itself, the highlight of the lot coming in the form of a supreme double save in the 4th minute. It was a sequence in which Bernardo Silva, driving from the left, floated a dangerous ball into the box. Aguero broke clear of Luke Shaw down the right-hand channel, and guided a header towards De Gea's bottom right corner, which De Gea parried out brilliantly with a strong arm. 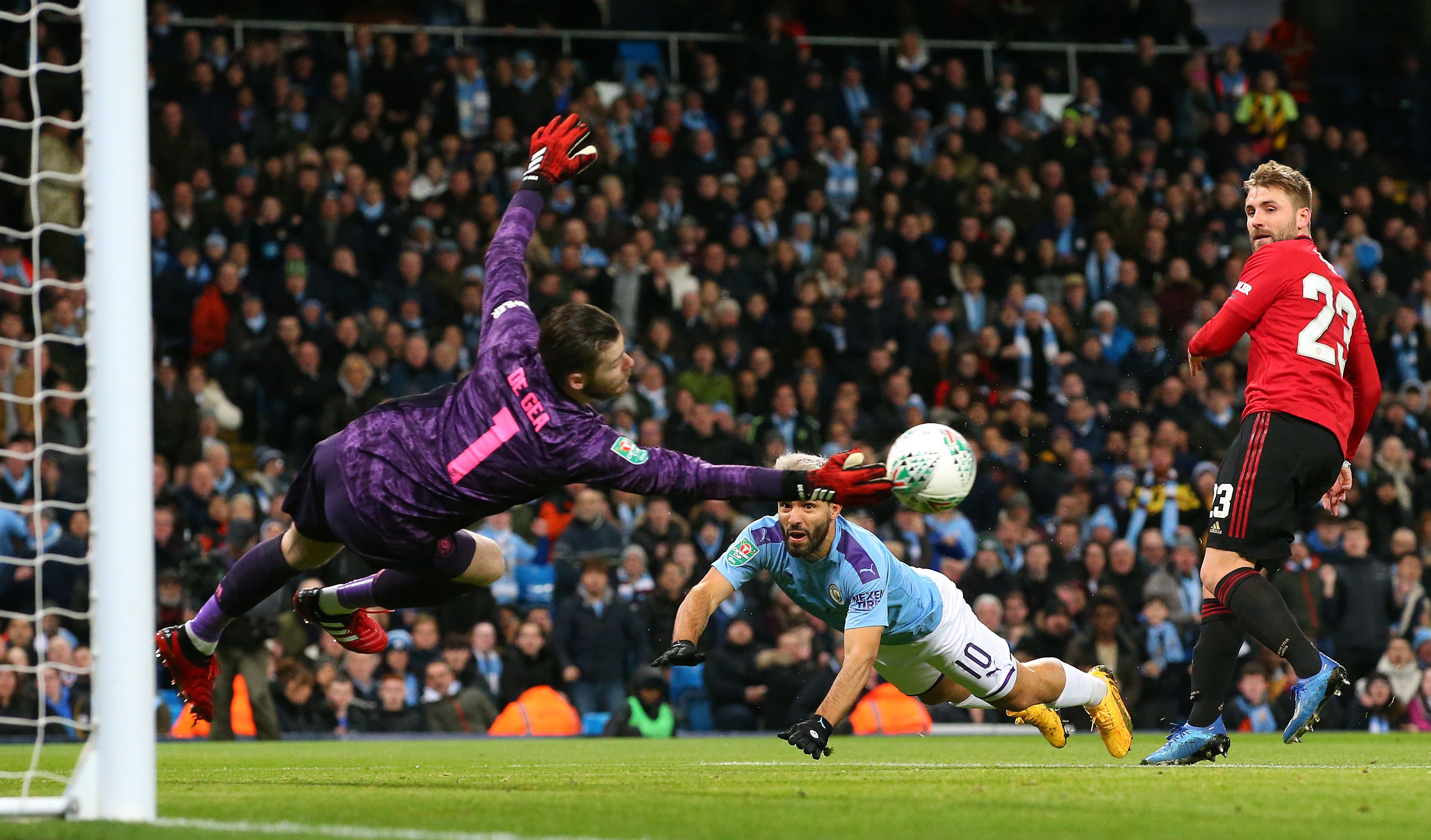 Seconds later, the Spaniard was called into action once again, as Mahrez snapped at the loose ball, forcing another acrobatic save from David de Gea. In the second half, City pressed further, with de Gea having to make saves from a scooped Kevin De Bruyne cross, a low De Bruyne shot, and a bullet-quick volley from Kyle Walker which was energetically palmed away.

In the end, the United number one kept a clean sheet. Although United exited the Carling Cup on aggregate, they went out admirably thanks to a monstrous performance from de Gea, who went home with a deserved man-of-the-match award.

Hart played a crucial part in what was a historic victory for the Blue half of Manchester in a derby clash that marked the 50th anniversary of the Munich Air Disaster. City visited Old Trafford at a time when they weren’t the force of nature that they are today. They had finished 14th in the 2006/2007 season and were vying for a top half finish at the time of their daunting visit to the home of the high-flying Red Devils, who were coming off a league win in 2007.

United were aiming to make it two in two league wins (they eventually did), with what was considered to be one of the finest Sir Alex Ferguson’s teams to have ever graced the Premier League. Joe Hart, aged just 19 at the time, was in his maiden season in the Premier League, and was just starting to get noticed by pundits, journalists, and fans.

It was in the 26th minute that Hart announced himself in the derby, pulling off an acrobatic save from a powerful Carlos Tevez drive. Further saves in the game from Tevez, Nemanja Vidic, and Anderson ensured that the Citizens held on to a 2-1 win. Hart was imperious in the City goal, and played a vital role in keeping United at bay as Sven-Goran Eriksson’s side stunned Old Trafford with a historic victory thanks to goals from Darius Vassell and Benjani. It helped City cement a league double over Manchester United for the first time since 1969/1970, and offered an early glimpse into the crucial role Hart would play over subsequent seasons for Manchester City, as they rose to dominance.

This Manchester United didn’t come as easy as it sounded. The state of the league before the Derby clash in the closing stages of the season in May 2007 was exciting. Victory for United, coupled with a Chelsea defeat the next day, would have sent the Premiership title back to Old Trafford. A draw could have taken the championship race to the final day. A defeat, on the other hand, would have bust the title race wide open.

Under such pressure, the Red Devils needed a win and a big performance, and on a day where the outfielders didn’t really impress, it was the man in goal who made the difference for the eventual champions. The experienced Edwin van der Sar seemed unbeatable from the first minute to the last. 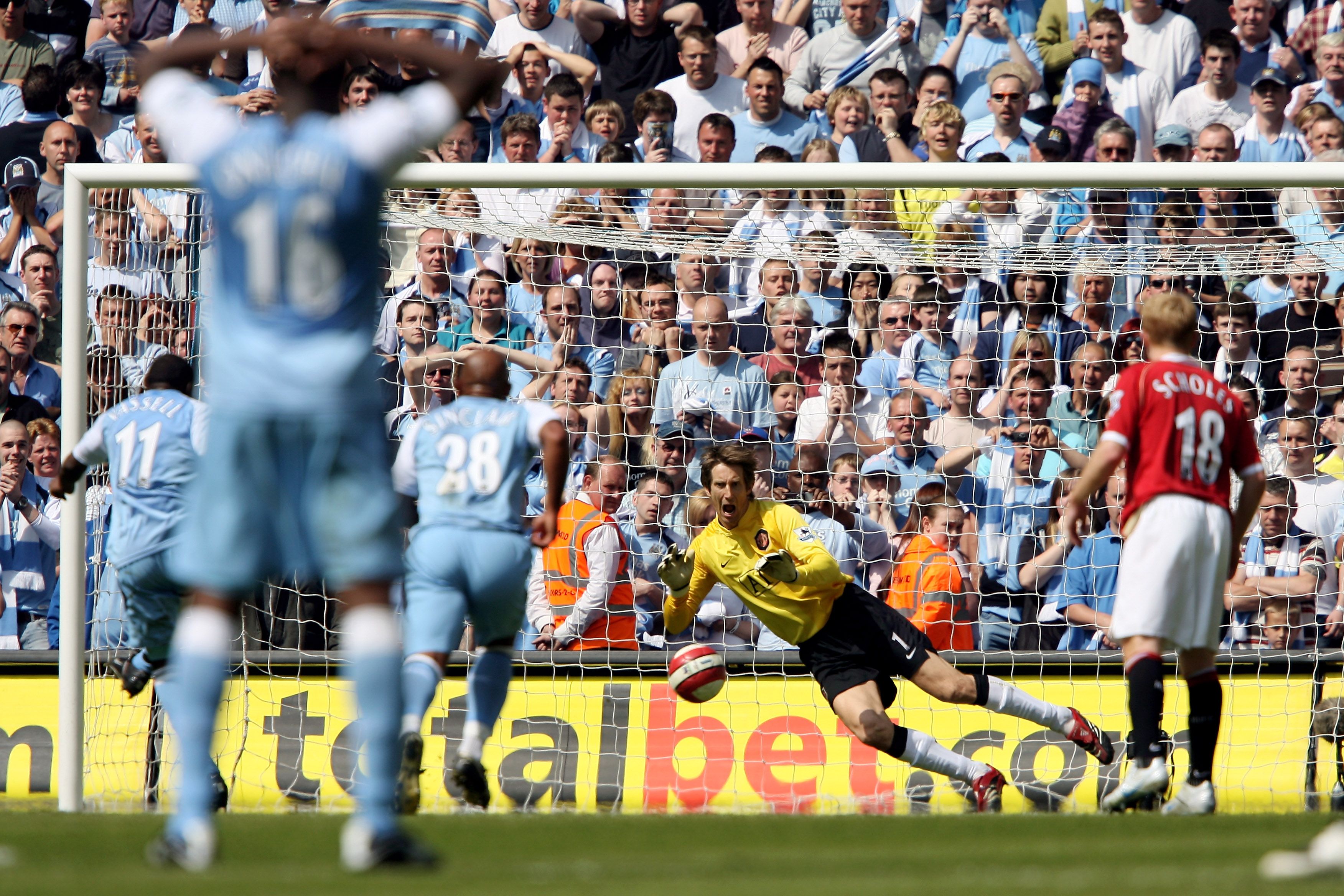 City’s first glimpse of goal came in the 7th minute, when van der Sar saved a rebounded shot from Darius Vassell. The remainder of the saves in the match were largely routine as both teams struggled to create due to season-ending tension and tiredness. Ronaldo’s 33rd minute goal was the separator between both Manchester clubs and seemed set to remain the winner.

But in the 80th minute, Wes Brown took down Michael Ball in the box to award the Citizens a penalty. Van der Sar used his experience to delay the penalty by putting Vassell off his game - an act that earned the Dutch goalkeeper a booking. But it seemed to have paid off. Vassell drilled the spot-kick towards the centre of goal, but Van der Sar pulled off a vital save with his knees, while diving towards his right.

On a day when United’s outfield made it really hard for themselves to dominate, it was their goalkeeper who stepped up and brought home the vital three points, which would eventually let the red side of Manchester seal the title.