Head of Data Science at Goalkeeper.com Dr. John Harrison has a look at some of the best and worst goalkeeping actions over Gameweeks five and six…

With the Premier League back in full swing and already throwing up saves, mistakes and all in between across the country, it was to the capital where the stats sent us this week for the best and worst of top flight goalkeeping.

Toney’s first time shot was heading right into the far corner at pace but Meslier got down like a flash and got a strong palm onto the ball to divert it away from goal. Historically, shots like Toney’s are only saved 26% of the time making it the most difficult shot to be saved this week.

If Meslier had tried to get a positive step (or power step) in before he attempted to dive across goal, I'm sure the pace on the ball would’ve meant he wouldn't have gotten down in time. Similarly, if he had attempted to go for a foot save with his left boot, I imagine it would’ve been outside of his maximal range and therefore would’ve also beaten him.

Roca snuck in behind the Brentford defence but Raya opted to stay deep and not engage the ball. This allowed Raya’s defenders to pressure Roca from behind and forced Roca into an early shot which Raya expertly saved due to his lightning quick reactions.

Historically, 1v1s like Roca’s are only saved 45% of the time making it the most difficult 1v1 to be saved this week!

Raya did not actually use the optimal strategy in this situation. Historically, an average Premier League goalkeeper would only save this shot 24% of the time if they adopted the strategy Raya did (waiting deep and attempting to react to the shot) as the shot was only 9 yards out. Ideally Raya would’ve rushed off his line and spread in front of Roca (using this strategy an average Premier League goalkeeper would make the save 61% of the time).

Still, Raya’s quick reflexes have to be applauded as he managed to make a huge save, even if his decision making made it more difficult for himself. Brentford fans should be very happy with the save but will hope in the future Raya's decision making can make saves easier for himself rather than harder!

Sessegnon scuffed a shot across goal and it was heading for the far corner. Leno managed to not only save it but deflect it expertly out for a corner when both Kane and Richarlison were ready to follow in on any rebounds.

Historically, this shot would be expected to grant a rebound with an expected goals value of 0.15 but Leno parried it out for a corner (worth 0.03 expected goals) making it the best handling moment of the week!

The key skill Leno showed here was ball manipulation and lovely soft hands. Rather than attempting to push the ball away by imparting a lot of force onto it, when making the save Leno simply used the pace on the ball and a flick of the wrist to guide it away from danger and out for a corner.

Given the angle of the shot Leno had very little margin for error as if his hand was any “harder” he would certainly have given Kane a huge chance to score. Moments like this are often undervalued but having a goalkeeper with top class handling can be vital over the course of a season. Sometimes it's goalkeepers that don't have to make any double saves that should be praised, not the ones who do!

Raya and Roca combined again, funnily enough, for the worst shot-stopping moment of the week.

After a low cross to the front post a lunging first time shot by Roca was too quick for Raya to get down to and it squirmed past him and into the centre of the net. Historically shots like Roca’s are saved 82% of the time making it the easiest shot not to be saved this week!

If Meslier’s save showed what wonderful shot stopping technique selection can do this goal highlighted what poor shot stopping technique selection can do. By attempting a negative step dive technique (collapse dive) and going for the ball with his hand Raya allowed a not particularly quick central shot to beat him. While the negative step dive technique does allow the goalkeeper to get their hand down as quick as possible, sometimes even this is slower than going with a foot. 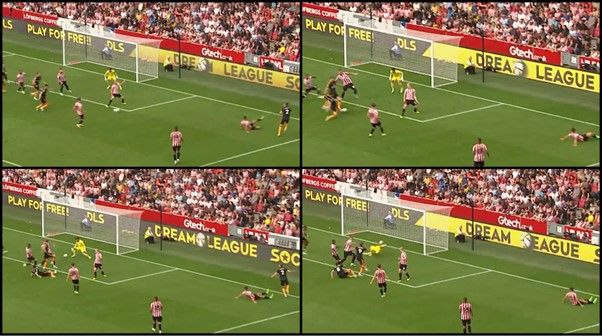 Therefore if the shot is within the foot saves range and is quick enough to make it difficult to get down in time with the hand, a foot save will always be optimal. The bottom left image highlights how close the ball’s trajectory was to Raya’s foot and how if he had executed a lateral split foot save the ball would’ve easily been within his range.

Many people still do not see the foot save as a vital skill in goalkeeping and see it as a 'personal preference' but this goal showed how it is a crucial skill all goalkeepers must have in their locker if they wish to make as many saves as possible as easy to make as possible.

After a lobbed through ball, Chilwell snuck in behind the West Ham defence on a tight angle and Fabianski decided to rush out but not form a premeditated barrier (like a spread or a block or a smother). All the left back had to do was weakly flick roll the ball through his legs and into the unguarded goal.

Historically, 1v1s like Chilwell’s are saved 76% of the time making it the easiest 1v1 not to be saved this week!

But by not forming any sort of premeditated barrier shape with his body, but still rushing out, Fabianski left himself very vulnerable as his body did not block off enough of the goal to make the save by the ball simply ‘hitting him’, nor did he have enough reaction time to attempt to react and get his body in the way of Chilwell’s shot.

Historically, using the engage and react technique, as Fabianski did, only gives a goalkeeper a 26% chance of making the save in a situation like this. Ideally Fabianski would’ve dropped into a block shape as  this would’ve given him a huge 94% chance of making the save by creating an effective barrier to block both the chipped finish and the through the legs finish while the angle was already tight enough that the curled finish would be very difficult for the striker to execute.

After a scramble in the air, Jesus toe-poked the ball goalward from close range. Martinez’s advanced position meant that even though the shot was weak he could only parry the ball right back into the danger zone. Luckily for Martinez, Saka’s rebound wasn’t the most powerful finish and was cleared off the line by a recovering defender!

Martinez gets himself into this predicament by not retreating quickly enough towards his line once he realises he cannot come to claim the ball. By being over three yards off his line when the attempt on goal is from just eight yards, Martinez vastly reduces his reaction time meaning not only is a catch is very difficult but also guiding his parry is tricky.

In order to execute clean catches and well guided parries, the main thing a goalkeeper needs is time to get their hands into the correct place and Martinez reduced this by staying so high. Ideally he would’ve been a yard or so further back towards his goal line which would have granted him that crucial extra reaction time to either catch the ball or palm it out wide and away from danger.